Amy Schumer, a stand-up comedian, writer, actress, and producer, recently filed what appear to be the first applications to register her name as a federal trademark. On November 23rd, Muffin Schumer, Inc. (which appears to be a holding company for Amy's trademarks) filed two federal trademark applications for AMY SCHUMER with the U.S. Patent and Trademark Office. 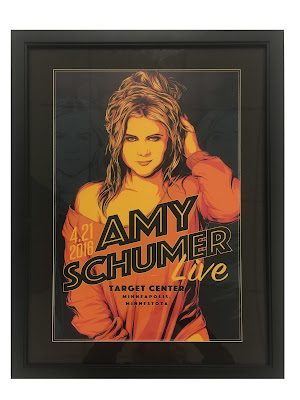 One AMY SCHUMER application covers "Entertainment services in the nature of live visual and audio performances, namely, musical, variety, news and comedy shows" in Class 41. The other covers "sweat shirts; t-shirts" in Class 25. According to the applications, Amy has been providing entertainment services at least as early as June 29, 2007. The application in Class 25 indicates she is not yet selling sweat shirts and t-shirts but has a bona fide intention to do so in the near future. 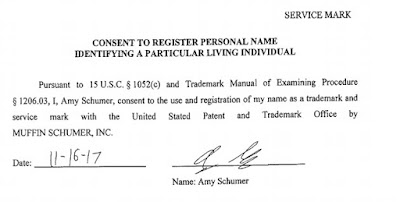 How do we know these applications are affiliated with the real Amy Schumer? Besides the fact that both applications were filed by a company that appears to be associated with Amy Schumer, the comedian also submitted her written consent to the use and registration of her name as a trademark (seen above). Section 2(c) of the Trademark Act requires this written consent when one seeks to register a name, portrait, or signature of a particular living individual as a trademark. See also TMEP 1206 et seq.

According to my quick search, these are the first applications for Amy Schumer's name (as I've blogged about before, it is not uncommon for celebrities and athletes to file applications to register their names as trademarks). However, Muffin Schumer, Inc. did recently obtain a registration for PLUS SIZE BRAIN covering "sweat shirts." Another application for PLUS SIZE BRAIN covering shirts and t-shirts is currently pending.
Posted by Alex Montgomery at 11:42 AM