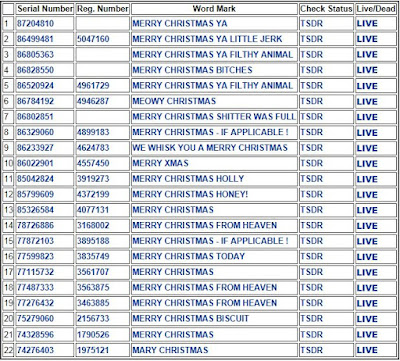 Posted by Alex Montgomery at 7:30 AM No comments: 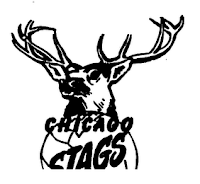 NBA Properties has filed similar CHICAGO STAGS trademark applications for clothing in the past, namely in the 1990's, including an application for the logo seen above filed in 1993.  None of those previous applications, which were all filed on an intent to use basis (like the one here), ever registered.
Posted by Alex Montgomery at 1:13 PM No comments:

It's THE MOST DUNKTASTIC TIME OF THE YEAR, according to the NBA.  The league recently released a YouTube video of its new commercial for Christmas Day with some of its top athletes singing about this DUNKTASTIC time of year. Around the same time, the league also filed trademark applications for the new, albeit made-up, term it appears to have coined (such made-up words, in fact, are often strong trademarks - see TMEP 1209.01(a)).

On December 15th, NBA Properties, Inc. filed federal trademark applications for DUNKTASTIC and IT'S THE MOST DUNKTASTIC TIME OF THE YEAR.  The applications cover various entertainment services related to basketball games in Class 41 and a wide range of clothing items in Class 25.

The NBA filed these applications on an intent to use basis, so the league will need to submit sufficient evidence of use before these applications will fully register.  See TMEP 904 and 1301.04.  Upon registration, the NBA will be entitled to claim an exclusive, nationwide right to use these terms in conjunction with the goods and services listed in the applications.
Posted by Alex Montgomery at 12:52 PM No comments:

If you even glanced at social media over the Thanksgiving holiday, you're familiar with the #UNameItChallenge (or you should be).  A clip of the gospel singer Dr. Shirley Caesar singing about "beans, greens, potatoes, tomatoes," etc. went viral across the internet and was remixed over and over (including by Snoop Dogg, who apparently did so with Shirley Caesar's blessing).

And now, as of December 9th, those recordings (the audio only) are the subject of three federal trademark applications filed by a Georgia entity called U Name It, LLC.  The services covered by those applications are a variety of entertainment services by a female artist in Class 41.

The audio covered by these applications includes clips of Shirley singing "I got beans, greens, potatoes, tomatoes," "Look - I got beans, greens, potatoes, tomatoes, lamb, rams [sic?], hogs dogs [sic], chicken turnkey [sic?] rabbit - you name it," and "You Name It."  Links to the actual audio covered by these applications are below:
It's unclear whether U Name It, LLC is related to Dr. Shirley Caesar's official #UNameIt Challenge shop, which apparently she is using to raise money for charity.  It's also unclear whether the applications were filed as part of the gospel singer's strategy in her lawsuit against DJ Suede (the creator of the original remix), which was filed right around the same time as these trademarks and was apparently prompted by the gospel singer's objection to the use of alcohol in the remix video.

Although applications for sound marks are not that common, sounds can serve as trademarks (for example, HBO obtained a registration for its iconic opening and closing clips).  The Trademark Manual Of Examining Procedure provides "[s]ound marks function as source indicators when they 'assume a definitive shape or arrangement' and 'create in the hearer’s mind an association of the sound' with a good or service." Section 1202.15.

If U Name It, LLC successfully obtains registrations for these sound marks it could, theoretically, prevent others from using similar audio in conjunction with entertainment services related to those listed in the applications.
Posted by Alex Montgomery at 3:18 PM No comments:

Email ThisBlogThis!Share to TwitterShare to FacebookShare to Pinterest
Labels: Shirley Caesar, trademarks, u name it challenge

Are These 26 Trademark Applications Recently Filed By Amazon Taglines For Its New Grocery Store Concept?

On December 5th, Amazon announced a new grocery store concept, first to be opened in Seattle, that will not require checkout lines.  On that same date, Amazon Technologies, Inc. also filed 26 federal trademark applications, each in Class 35 covering


Advertising; business management; business administration; office functions; retail services and online retail services connected with the management of a retail store and or supermarket; Retail store services in the field of fresh and prepared foods and dry goods; customer loyalty rewards program for shoppers; information, advisory and consultancy services relating to the aforesaid.

Amazon filed each application on an intent to use basis, meaning it is [probably] not using the marks yet but has a bona fide intention to do so in the near future.

The goods and services covered by that last application span five different classes, are too numerous to list, and cover almost everything under the sun.

So are the 25 marks above, filed on the same day Amazon announces its new grocery store and files a trademark application for the name of same, taglines for the new grocery store?  Again, you be the judge...
Posted by Alex Montgomery at 1:27 PM No comments:

Like the UBERFREIGHT application back in October, Lyft filed this application on an intent to use basis, suggesting it is [probably] not using this mark in conjunction with the listed goods and services in commerce yet, but has a bona fide intention to do so in the near future.

According to my quick search, Lyft, Inc. currently owns 36 live trademark applications or registrations with the U.S. Patent and Trademark Office, including a mark for LYFTCARE covering medical transportation services filed last month.
Posted by Alex Montgomery at 10:33 AM No comments: 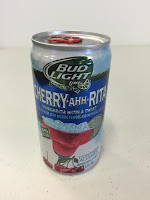 According to my quick search, the GRAPE-A-RITA application brings the total number of live trademark applications or registrations owned by Anheuser-Busch in the U.S. Patent and Trademark Office to a whopping 573.
Posted by Alex Montgomery at 9:07 AM No comments: