Curtis J. Jackson III, aka 50 Cent, filed two federal trademark applications on January 26th for the name of his 2003 rap album - GET RICH OR DIE TRYIN.

These applications, however, are not related to music.  Instead, the artist filed one application in Class 41 for "Entertainment services in the nature of continuing program series, featuring live action, comedy and drama provided through cable television, broadcast television, internet, video-on-demand, and through other forms of transmission media; providing online information in the field of entertainment concerning television programs."

50 Cent filed another application for GET RICH OR DIE TRYIN covering various clothing items [ed. - merchandise related to the show?].

Both applications were filed on an intent to use basis, suggesting that 50 Cent is not using these marks in conjunction with the listed goods and services yet, but has a bona fide intention to do so in the near future.

Are these applications related to a new 50 Cent TV show called GET RICH OR DIE TRYIN? We may find out soon.
Posted by Alex Montgomery at 1:33 PM No comments: 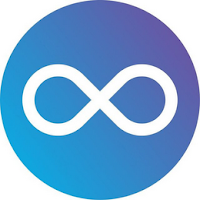 According to Hyperloop Technologies' website, "Hyperloop is a new way to move people and things at airline speeds for the price of a bus ticket."  The website also claims that a trip from Melbourne, Australia to Sydney in the loop would take approximately 55 minutes (an almost 11 hour trip in the car).

Hyperloop Technologies filed most of the applications related to the transportation of passengers in high speed tubes on an intent to use basis, which means they are required to start providing those transpiration services before these applications can mature into a federal trademark registration. TMEP 1109.03; 37 CFR 2.88(a)(2).  Hyperloop technology might not be as far off as it seems.
Posted by Alex Montgomery at 10:35 AM No comments:

Ohio State University added another application to its ever expanding federal trademark portfolio on January 19th.  On that date, the university filed a federal trademark application for the stripe seen below. The mark is described as "a stripe design containing distinct bands of the colors black, white, and red."

The application covers a variety of clothing items in Class 25, replica and collector football helmets in Class 28, and entertainment services related to sporting events, courses in sports and fitness instruction, and a website relating to sports in Class 41. 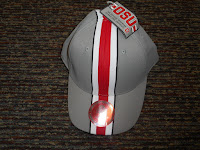 The university filed the application on an in-use basis, with dates of first use in commerce ranging from 1966 (sporting events) to 1993 (football helmets).

This is not the first time the Ohio State University filed trademark applications related to the school's colors.  In February 2016, I blogged about a trademark application for a jersey design the school filed and how it had claimed acquired distinctiveness in designs in the past to successfully register them as trademarks.

The particular application for the jersey I blogged about last year has since been abandoned, however. In that case, the Trademark Office issued an Office action in which it refused registration because "the applied-for color mark, consisting of one or more colors used on some or all of the surfaces of a product or product packaging, is not inherently descriptive" and thus not entitled to registration without a showing of acquired distinctiveness. OSU did not respond (it did, however, file another application for a similar jersey in March 2016, which did register after successfully showing acquired distinctiveness). It is possible OSU may face a similar Office action for the stripe above. We will find out in approximately three months when it is assigned to an Examining Attorney.
Posted by Alex Montgomery at 11:07 AM 2 comments:

Viacom, Inc. had a busy day at the U.S. Patent and Trademark Office on January 18th.  On that date, the entertainment company and owner of the MTV, VH-1, BET, Comedy Central, and Nickelodeon brands (among others), filed federal trademark applications for what may be several new TV shows.

The marks filed for the potential new shows are:
Viacom filed each of the above applications on an intent to use basis, suggesting these marks aren't actually being used by the company in commerce yet but there is some sort of plan to use each mark in the near future.  Some of the applications also covered a variety of merchandise related to the shows, such as clothing and toys.

It's anyone's guess which channels the above shows might appear (if they appear at all, and except for MTV VIDIOTS, of course) but if these trademark applications are any indication, some or all of Viacom's channels may be getting new shows sometime soon.

Posted by Alex Montgomery at 12:58 PM No comments:

And, to be fair, the MMA/UFC fighter (or, more correctly, his business entity) included a number of other goods and services in the applications, including health and fitness training.

The federal trademark applications filed on January 9th by McGregor Sports and Entertainment (an Irish limited company) were for the fighter's actual name, CONOR MCGREGOR, and his nickname, THE NOTORIOUS.

One thing notably missing from the applications is Conor McGregor's written consent to register his name as a trademark.  That consent is required when a mark identifies a particular living individual.  See TMEP 813.  He may also need to consent to the registration of THE NOTORIOUS, as the written consent requirement applies to "a pseudonym, stage name, or nickname, if there is evidence that the name identifies a specific living individual who is publically connected with the goods or services, is generally known, or is well known in the field relating to the relevant goods or services."  TMEP 813.

Posted by Alex Montgomery at 1:09 PM No comments: 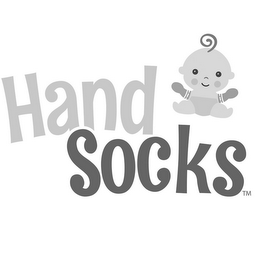 So what do you think?  Does HANDSOCKS immediately convey something about mittens? Or is it an incongruous word combination that requires some imagination and mental pause to determine the underlying goods? We'll find out what the Examining Attorney thinks when this is assigned to one in approximately three months.
Posted by Alex Montgomery at 10:24 AM No comments: