Do you know BOTUS? Aka Marlon Bundo, the Bunny of the United States, and the pet of Vice President Mike Pence's daughter? He's now the subject of two federal trademark applications. 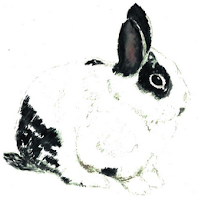 On March 29, Charlotte Pence, the Vice President's daughter, and Karen Pence, the Vice President's wife, jointly filed with the U.S. Patent and Trademark Office two trademark applications related to the bunny - one for the drawing seen to the right and another for the words MARLON BUNDO. Both applications cover the same broad range of goods, including:

The Vice President's wife and daughter filed both application on an intent to use basis, suggesting they are not using these designations as trademarks in conjunction with all the goods listed in the applications, but have a bona fide intention to do so in the near future. 15 USC 1051(b); TMEP 806.01(b). Before these applications can mature into registrations, Charlotte and Karen must start actually using the drawing above and the name MARLON BUNDO in commerce as trademarks and submit sufficient proof of same to the USPTO. TMEP 1103.

The trademark applications follow the release of Charlotte and Karen Pence's new children's book featuring the bunny, entitled "Marlon Bundo's Day in the Life of the Vice President." John Oliver, host of HBO's "Last Week Tonight", parodied the book with his own version shortly after its release.

According to my quick search, these are the first federal trademark applications filed by Charlotte or Karen Pence. To see Marlon for yourself, check out his Instagram page, which now boast over 32,000 followers.
Posted by Alex Montgomery at 6:30 AM