Recognize the closing credits scene below? Can you hum the jingle that accompanies it?

This animated scene appears at the end of The Simpsons, and other shows produced by James L. Brooks' Gracie Films. The film and television production company (or, more specifically, the Trustee(s) of The Brooks Family Trust) just filed federal trademark applications for the logo (seen below), animation, jingle accompanying the animation, and the words GRACIE FILMS and JAMES L. BROOKS.

The Brooks Family Trust filed each of these applications on October 5th and, with the exception of the JAMES L. BROOKS application, all the applications cover entertainment services in the field of film and television, namely, the creation, production and distribution of motion picture films, television programs and animation in Class 41 and claim a first use date of 1984. The JAMES L. BROOKS application covers "Entertainment services, namely, director, producer, and screen writing services for motion picture films and television programming" and claims a first use date of 1965.

As these applications demonstrate, and as I've blogged about before, it is possible for trademarks to take the form of something other than a name or a logo (in this case, a sound and an animation). Sound marks, for example, can "function as source indicators when they 'assume a definitive shape or arrangement' and 'create in the hearer’s mind an association of the sound' with a good or service." TMEP 1202.15. You can listen to the sound covered by the sound mark application here. Is this a familiar arrangement that creates an association with a particular good or service in your mind?

Shorts clips or animations can also function and be registered as trademarks. HBO, for example, obtained a registration for its iconic opening and closing scene. The motion must actually identify and distinguish the goods/services and indicate their source. To identify the motion mark, the applicant must submit to the Trademark Office a drawing that "depicts a single point in the movement, or...a square drawing that contains up to five freeze frames showing various points in the movement, whichever best depicts the commercial impression of the mark" along with a "detailed written description of the mark." TMEP 807.11. 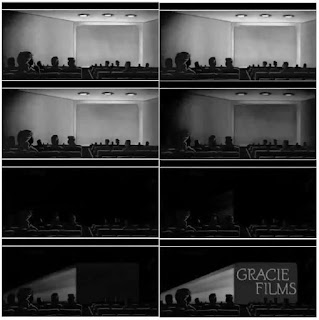 For this motion mark application, the Trustee(s) of the Brooks Family Trust submitted the drawing above and described the mark as "a computer generated sequence showing movie goers in a darkened movie theater watching a projection of a film with the words "GRACIE FILMS" on the movie screen."

These Gracie Films-related trademark applications are a great example of the different types of marks that may be registered with the U.S. Patent and Trademark Office. These five applications cover standard character (word) marks, design marks (i.e., logos), sound marks, and motion marks. While the procedural hurdles for obtaining registrations for sound and motion marks can be a little more complex, such registrations are certainly possible.
Posted by Alex Montgomery at 10:08 AM