The Ohio State University is aggressive about protecting its trademark rights and holds 111 live applications or registrations with the United States Patent and Trademark Office. The University also claims ownership of a broad range of unregistered common law trademarks (I know from personal experience, having represented a client who received a cease and desist letter from them).

On February 18th, the University filed its most recent federal trademark application, which seeks protection for the design elements of the football jersey seen below. It was filed in Class 025 for "[c]lothing, namely, football jerseys." 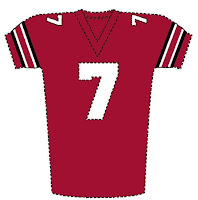 The application claims the colors red, black, and white as a feature of the mark, and it describes it as "a two-dimensional representation of the mark, which consists of the design elements and color combinations appearing on a three-dimensional scarlet or red football jersey with the stripe pattern on both sleeves." According to the application, this jersey has been in use since at least September 22, 1979.

How can a university claim trademark protection for a simple looking jersey? By showing that the jersey has become distinctive through the university's exclusive and continuous use of the mark for decades. Essentially, that means the University is claiming that the jersey does not just depict a red, black, and white jersey, but it depicts a jersey that is so well known it is associated with the University. If a descriptive trademark acquires this distinctiveness, it is capable of obtaining a federal trademark registration.

The recent trademark application is not the first filed by Ohio State to protect its uniforms. The University obtained trademark registrations for the uniform designs above in 2015. In those applications, the University successfully claimed the uniforms had acquired distinctiveness and were thus capable of trademark protection.

The University appears hopeful that a claim of acquired distinctiveness will also protect its most recent jersey filing.
Posted by Alex Montgomery at 9:47 AM