When I clicked this trademark application, I had an idea as to what it may be referring, and sure enough my suspicions were confirmed. On May 22nd, a Delaware company called Integrity Brands, LLC filed a federal trademark application with the U.S. Patent and Trademark Office for COTTON CANDY COMB OVER [standard characters] covering "candy; cotton candy" in Class 30. According to the application, the applicant has been using this mark since at least April 1, 2017.

The specimen submitted with the application, which shows the manner in which the mark is seen by the public (see TMEP 904 et. seq.) and is pictured below, shows you where the applicant got this unique idea for their cotton candy. 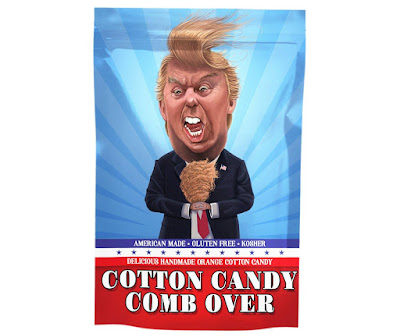 Are there any issues with this application? Is the applicant entitled to a federal registration for this mark? A couple sections of the Trademark Act that might apply are discussed below.

Section 2(c) of the Trademark Act (15 USC 1052(c)) is an absolute bar to the registration of a mark that "consists of or comprises a name, portrait, or signature identifying a particular living individual except by his written consent..." This bar applies not only to full names, but also "first names, surnames, shortened names, pseudonyms, stage names, titles, or nicknames." TMEP 1206.01.

However, unlike the application for TRUMPMOJI that I blogged about last year, which was refused registration under Section 2(c) for using Trump's name, this mark does not contain anything referring to Trump, just the words COTTON CANDY COMB OVER. The specimen shows how the public views the mark, but nothing other than the words COTTON CANDY COMB OVER are the subject of this trademark application.

What about Section 2(a) (15 USC 1052(a)), which bars the registration "of a designation that consists of or comprises matter which, with regard to persons, institutions, beliefs, or national symbols, does any of the following: (1) disparages them; (2) falsely suggest a connection with them; (3) brings them into contempt; or (4) brings them into disrepute"? TMEP 1203.03.

When it applies to a non-commercial interest, the elements of a Section 2(a) disparagement refusal are:

TMEP 1203.03(b)(i). This refusal, for example, has been applied to the mark HEEB for clothing and entertainment services, when the evidence supported the derogatory nature of HEEB in reference to the Jewish community. In re Heeb Media LLC, 89 USPQ2d 1071 (TTAB 2008). Is the term COTTON CANDY COMB OVER of a similar nature? Doubtful. (Note - the constitutionality of the disparagement bar under Section 2(a) was recently argued in front of the U.S. Supreme Court and a decision is due any day).

To establish that a mark may falsely suggest a connection with a person or an institution as prohibited by Section 2(a), it must be shown that:
TMEP 1203.03(c)(i). Again, the mark here is COTTON CANDY COMB OVER, not anything mentioning Trump. Is COTTON CANDY COMB OVER a "close approximation of, the name of identity previously used by another person" and "would be recognized as such, in that it points uniquely and unmistakably to that person or institution"?

You be the judge of the above. We'll find out what the examining attorney assigned to this application at the USPTO thinks when this application is assigned in approximately three months.
Posted by Alex Montgomery at 10:12 AM