It looks like the Vikings' legal team is doing some off-season strength building in expanding its trademark portfolio. On May 18th, Minnesota Vikings Football, LLC filed 48 federal trademark applications with the U.S. Patent and Trademark Office. Although the team filed 48 different applications, the applications cover only three marks - SKOL VIKINGS, SKOL SERVICE, and SKOL. 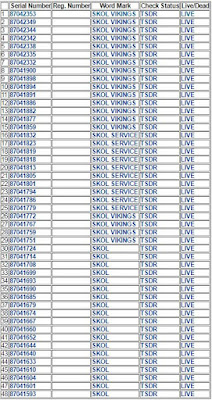 Why so many applications for only three marks? Because each application is filed in a different class of goods or services. For example, the team filed SKOL VIKINGS for "[o]nline social networking services" (Class 045), "[r]eal estate development" (Class 037), "toys and sporting goods" (Class 028), and several other goods and services. The applications for SKOL and SKOL SERVICE cover similar goods and services. All the applications include entertainment services in the nature of professional football games and a variety of merchandise. The team filed each application on an intent-to-use basis.
Posted by Alex Montgomery at 8:56 AM