NOT CHOCOLATE Not Merely Descriptive?

On November 8th, a Chilean-based business called The Not Company filed five different federal trademark applications in the U.S. for a variety of goods that are "not" what they appear. Those applications are:

The applications are for the respective design show below. 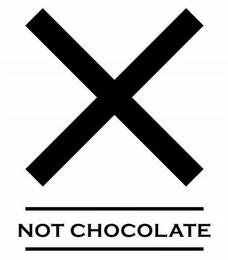 All these applications are on the Principal Register. As such, they cannot be merely descriptive if they are going to be fully registered. As I've blogged about many times before, the Trademark Office considers a mark merely descriptive if "it describes an ingredient, quality, characteristic, function, feature, purpose, or use of the specified goods or services." TMEP 1209.01(b).

For example, in July I blogged about a trademark for CHORIZO DOG that was filed for preserved meats and sausages. As I predicted, this mark received an office action for being merely descriptive.

Is a mark like NOT CHOCOLATE merely descriptive of a chocolate substitute that is not actually chocolate? Maybe. We will find out in approximately three months when an examining attorney at the Trademark Offices looks over this application.
Posted by Alex Montgomery at 9:14 AM