Recent trademark applications filed at the U.S. Patent and Trademark Office hint that RoboCop may be coming back in the form of a streaming internet series. On August 26th, Orion Pictures Corporation in Beverly Hills filed two new trademark applications for ROBOCOP (the company owns four other registrations for ROBOCOP covering other goods and services). 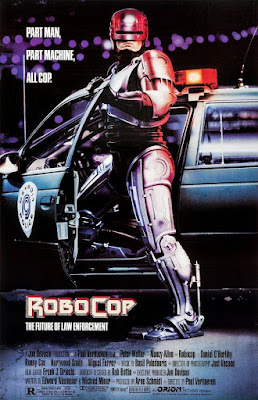 Orion filed the first application in Class 041 for "Entertainment services, namely, production and distribution of a series of motion pictures featuring drama, action, crime, science-fiction and suspense." The first use date listed for those services is December 8, 1986 (probably when promotion of the July 1987 release of the original movie commenced).

It is the second application for ROBOCOP, however, that is more interesting. Orion filed that application in Class 041 for "Entertainment services, namely, an ongoing series featuring scripted action/drama provided through the internet; entertainment services, namely, providing ongoing webisodes featuring scripted action/drama via a global computer network[.]"

An ongoing series provided through the internet and webisodes (aka streaming)? Like a Netflix series? Amazon Prime? As a RoboCop fan, that all sounds good to me.

Orion filed the second ROBOCOP application on an intent-to-use basis, suggesting the film company is not using the mark in conjunction with an online streaming show yet but has a bond fide intention to do so in the near future. In other words, a streaming RoboCop series may be in the works. Stay tuned.
Posted by Alex Montgomery at 11:58 AM