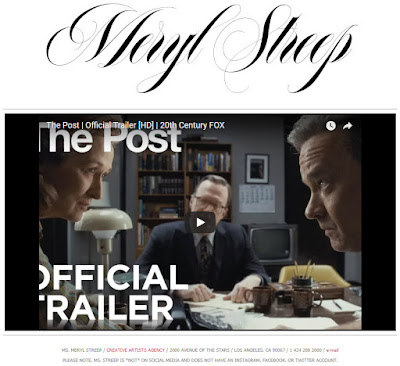 The trademark application covers "Entertainment services, namely, live, televised, and movie appearances by a professional actress and entertainer; Personal appearances; Speaking engagements; Autograph signings; Providing a website featuring content in the field of motion pictures" in Class 41 and lists a first use date of 1975 (which corresponds with the earliest piece listed in her filmography on IMDB.com - Everybody Rides the Carousel (1975)). The application was filed on Ms. Streeps behalf by Keats Gatien, LLP in Beverly Hills.

Somewhat surprising, this appears to be the first ever trademark application filed for MERYL STREEP in the United States and the only trademark application or registration owned by Mary Louise Streep. As I've blogged about before, celebrities, athletes, and other public figures often seek to register their names as trademarks with the USPTO (like Chrissy Teigen, Conor McGregor, and Jay Leno).

Assuming the written consent hiccup is quickly resolved, and the rest of the application passes the USPTO's examination process, Meryl Streep may have a federal trademark registration for her name by the end of 2018.
Posted by Alex Montgomery at 10:30 AM