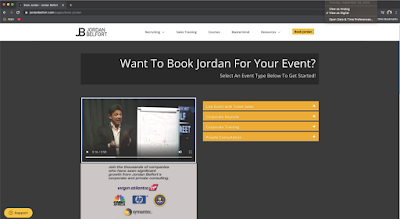 Is Pepsi Blue Making a Comeback? A Recent Trademark Application Suggests So

While I only vaguely recall it, Pepsi Blue was a berry-flavored version of Pepsi that was launched in the U.S. in 2002 and discontinued shortly thereafter in 2004. Pepsico, Inc. previously owned federal trademark registrations for both the PEPSI BLUE name and former logo (seen below), but the U.S. Patent and Trademark Office canceled those registrations nearly ten years ago after Pepsi failed to renew them (likely due to non-use, as use is a requirement to renew a trademark registration). 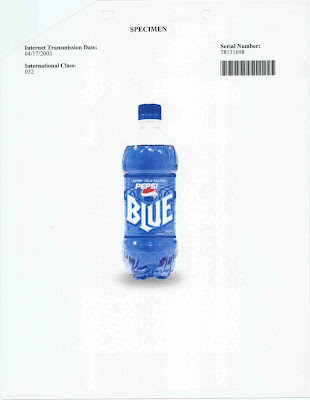 However, a recent trademark application filed at the USPTO by Pepsico, Inc. suggests that Pepsi Blue might be making a comeback. On June 25, Pepsico filed a federal trademark application to register PEPSI BLUE as a trademark for "Concentrates, syrups or powders used in the preparation of soft drinks; Soft drinks" in Class 32.
Pepsico filed the application on an intent-to-use basis, suggesting it is not currently using PEPSI BLUE as a trademark for the listed goods, but has a bona fide intention to do so in the near future. See TMEP 806.01(b); 15 USC 1051(b). Before PEPSI BLUE can be registered as a trademark again, Pepsico must start using the PEPSI BLUE trademark in interstate commerce in conjunction with the listed goods and submit sufficient proof of such use to the USPTO.
While Pepsico is not required to start selling Pepsi Blue again, it does mean something is likely in the works.
This is the first trademark application for PEPSI BLUE filed by Pepsico since the now dead PEPSI BLUE registrations it filed for in 2002. Fans of Pepsi Blue - pay attention to this application.
Posted by Alex Montgomery at 12:28 PM No comments:

Email ThisBlogThis!Share to TwitterShare to FacebookShare to Pinterest
Labels: pepsi

On May 7, the hockey company filed a federal trademark application for BAUER, but it didn't cover hockey equipment. Instead, it covered the following goods:

Bauer filed the application on an intent-to-use basis, suggesting it is not currently selling these goods in conjunction with the BAUER trademark yet, but has a bona fide intention to do so in the near future (which makes sense). See TMEP 806.01(b); 15 USC 1051(b). Before this particular BAUER trademark can be registered, Bauer must actually start using the BAUER trademark in interstate commerce in conjunction with the goods listed in the application and submit sufficient prove of such use to the USPTO. See TMEP 1103.

Kudos to Bauer for doing its part.
Posted by Alex Montgomery at 10:38 AM No comments:

PwC Files Application to Register AUTOMATIC CONTACT TRACING As a Trademark for Web-Based Software. Any Issues?

Coronavirus-related trademark applications are flooding the U.S. Patent and Trademark Office recently, to no one's surprise. And a recent application from PricewaterhouseCoopers is no different.

On May 6, the global professional services firm filed an application to register AUTOMATIC CONTACT TRACING as a trademark with the USPTO. The application covers the following services in Class 42:

According to the application, PwC has been using AUTOMATIC CONTACT TRACING as a trademark (or, more accurately, a service mark) since March 30, 2020. Submitted with the application to prove use is the specimen seen below. 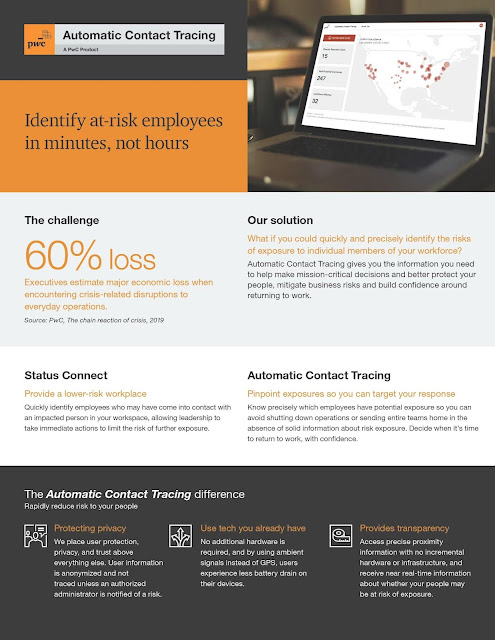 See any potential issues? Is this mark merely descriptive of the underlying services?

Does AUTOMATIC CONTACT TRACING merely describe the underlying services listed in the application and show in the specimen above? If so, the USPTO will issue a refusal to register this mark. PwC can submit arguments against that refusal, amend the application to the Supplemental Register (assuming the mark is being used as a service mark and actually in use), or choose to abandon the application.

We'll find out what an examining attorney at the USPTO thinks when this application is examined in approximately three months. Stay tuned.
Posted by Alex Montgomery at 9:41 AM No comments:

With the COVID-19 pandemic starting to overwhelm our daily lives, it's not surprising to see individuals and companies filing federal trademark applications for the term.

Most recently, on March 9, an individual in California filed applications to register the three slogans below as federal trademarks:

The applications could also face barriers in the examination phase. For example, the USPTO will likely ask the applicant to specify the type of clothing in Class 25. Further, depending on the applicant's use of these slogans, the USPTO may find them to merely convey a message rather than function as an identifier of the source of the goods/services. See TMEP 1202.03(f)(i).

In any event, one can expect to see a slew of CORONAVIRUS and COVID-19 trademark applications filed in the near future. And, as always happens when a popular phrase comes about, you can expect the vast majority of those applications die before registration.
Posted by Alex Montgomery at 10:08 AM No comments: 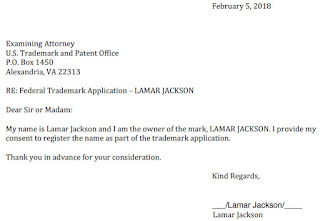 Lamar Jackson, individually, is listed as the owner of each application above. According to my quick search, there are currently three other federal trademark applications pending that are owned by Lamar Jackson. All three are for various logos that appear to be related to his Era 8 apparel line.
Posted by Alex Montgomery at 10:22 AM No comments: