Oklahoma's Baker Mayfield, the 2017 Heisman Trophy winner, is one of the top prospects going into this year's NFL draft. And it he appears he is seeking to capitalize on the popularity of his name (and protect it) by filing an application to register it as a trademark with the U.S. Patent and Trademark Office.

Some of the goods and services covered by this application include:

In addition to possibly clarifying some of the listed goods and services (which must be concise and cannot be indefinite), the Trademark Office will require Baker Mayfield to give his written consent to the registration of his name as a trademark. Section 2(c) of the Trademark Act prohibits the registration of a trademark that comprises the name or signature of a living individual without that individual's written consent. TMEP 1206 et seq. That consent was not submitted with the application.

Are you a Ralph Lauren fan who loves dogs? Does your dog prefer designer clothing? If so, this potential dog apparel line from Ralph Lauren might be for you.

Ralph Lauren filed this application on an intent-to-use basis, suggesting it is not currently selling the goods listed in the application under the RUFF LAUREN mark but has a bona (ed. - not bone) fide intention to do so in the near future. 15 U.S.C. 1051(b); TMEP 1101. Before this application can mature into a registration, Ralph Lauren must actually start using this mark in conjunction with the sale of the listed goods and submit sufficient proof of same to the USPTO. TMEP 1103.

According to my quick search, PRL USA Holdings, Inc. owns 327 active applications or registrations with the USPTO.
Posted by Alex Montgomery at 9:58 AM No comments:

First Application to Register CHICAGOWEST as a Trademark Filed, But Not By Who You Think 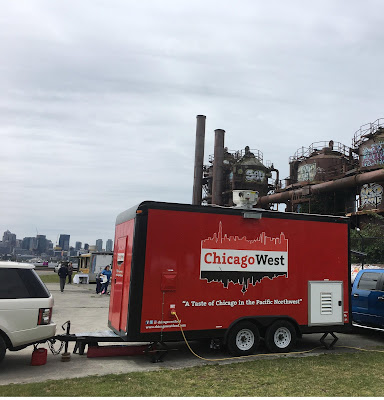 Instead, the first CHICAGOWEST trademark application, which was filed by ChicagoWest, LLC on February 4th, covers "hot dog sandwiches; popcorn; sandwiches" and appears to be related to a food truck (the website actually pokes fun at the situation, thanks Kim and Kanye for naming their daughter after their food truck, and announces the release of a new menu item called BabyWest). According to the trademark application, ChicagoWest, LLC has been using CHICAGOWEST as a trademark since September 15, 2016 (long before the birth of Kim and Kanye's daughter).

Will there be beef (ha!) between ChicagoWest, LLC and Kim/Kanye? It depends. As an initial matter, Kim and Kanye would need to use CHICAGO WEST as a trademark to assert trademark rights in the name. Generally, this means they are selling goods or providing services under the CHICAGO WEST name, rather than merely using it as the name of their daughter.

Further, goods and services offered under a trademark must be related to those offered under another similar trademark for infringement to arise (or for the Trademark Office to refuse to register a later filed application under Section 2(d) of the Trademark Act). If Kim/Kanye do not use the CHICAGO WEST name as a trademark with any goods/services related to sandwiches, hot dogs, and popcorn, it would be difficult to assert infringement of ChicagoWest, LLC's mark (and Kim/Kanye could likely obtain a federal trademark registration for CHICAGO WEST for different goods/services).

In sum, it seems unlikely that a fight will cook up between this food truck and Kim/Kanye (at least in the trademark context), but the actions of third parties are impossible to predict. Note that this is a trademark blog, so I won't go into detail about other laws that might be applicable, such as the right of publicity.
Posted by Alex Montgomery at 10:19 AM No comments: