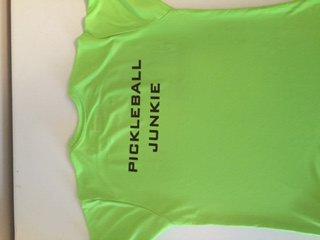 The applicant submitted a picture of the t-shirt seen above as its specimen of use. However, phrases on the front of shirts are almost never function as a trademark because they are considered purely decorative (rather than indicating source). The Trademark Office explains "[s]ubject matter that is merely a decorative feature does not identify and distinguish the applicant's goods and, thus, does not function as a trademark." TMEP 1202.03.

Specifically relating to apparel, the Trademark Office has said "[s]logans or phrases used on items such as t-shirts and sweatshirts...have been refused registration as ornamentation that purchasers will perceive as conveying a message rather than indicating the source of the goods." TMEP 1202.03(f)(i).

So how does one protect a clothing related trademark? The Trademark Office again provides some insight - "[a] small, neat, and discrete word or design feature (e.g., small design of animal over pocket or breast portion of shirt) may be likely to create the commercial impression of a trademark..." TMEP 1202.03(a). Additionally, a trademark appearing on the tag of a shirt also typically functions as a trademark. See TMEP 904.03(a). I have blogged about trademarks on clothing before here.

The Trademark Office will not refund filing fees for applications refused registration as ornamental or decorative matter and the $225 filing fee the applicant paid for the PICKLEBALL JUNKIE application is probably lost as well. All the more reason to speak with a trademark attorney before filing a trademark application.

Side note - what is pickleball?
Posted by Alex Montgomery at 8:34 AM