A couple weeks ago it was Beyonce filing applications for the names of her and JAY Z's twins, now it's JAY Z's turn. On July 6th, S. Carter Enterprises, LLC (a company associated with JAY Z) filed fifteen applications to register JAYBO as a federal trademark with the U.S. Patent and Trademark Office. 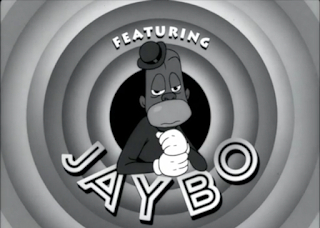 According to my quick research, Jaybo is an animated character in the music video for "The Story of O.J.," a song released as part of JAY Z's new 4:44 album. The full video is available on YouTube. In the video, JAY Z highlights a long history of racist cartoons from major animation studios, including Disney and Warner Bros.

Each application was filed on an intent to use basis, suggesting S. Carter Enterprises is not using JAYBO in commerce with these goods and services yet but has a bona fide intention to do so in the near future. TMEP 806.01(b); 15 USC 1051(b). It also means the company must actually start using JAYBO with the listed goods and services before the applications will mature into trademark registrations. TMEP 902; 15 USC 1051(c)-(d).

If you're a JAY Z fan, keep an eye out for JAYBO merchandise, potentially coming soon.
Posted by Alex Montgomery at 12:59 PM