Is NUTTY NECKLACE Merely Descriptive of Necklaces Made of Stainless Steel Nuts? Not So Fast...

On August 5th, an individual in Pennsylvania filed an application to register NUTTY NECKLACE as a trademark with the U.S. Patent and Trademark Office. The application covers "necklaces" in Class 14 and indicates the mark has been in use since January 5, 2000. 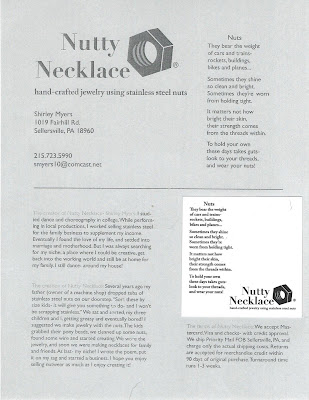 The specimen submitted with the application (which is suppose to show how the mark is actually used in commerce and is seen above) indicates that this mark is used in conjunction with the sale of "hand-crafted jewelry using stainless steel nuts." Makes sense. But is it merely descriptive, and therefore not registerable on the Principal Register without a showing of acquired distinctiveness? See TMEP 1212; 15 USC 1052(f).

Does NUTTY NECKLACE only describe a characteristic or quality of the necklaces? Or does it have another interpretation that is not merely descriptive, such as suggesting a quirky, non-traditional necklace? We'll find out what the Examining Attorney assigned to this application thinks in approximately three months.
Posted by Alex Montgomery at 10:15 AM