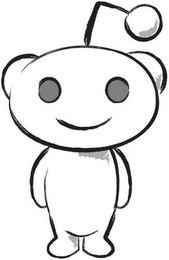 Some of the goods and services covered by these applications include:

The website filed all these applications on an intent-to-use basis, suggesting it is not using this design in interstate commerce as a trademark yet, but has a bona fide intention to do so in the near future (which makes sense considering a quick scan of reddit.com doesn't reveal this mark). TMEP 806.01(b); 15 USC 1051(b).

Why file new trademark applications for the design above if Reddit already has registrations for its current logo (see here, for example), which is pretty similar? Because Section 7(e) of the Trademark Act (15 USC 1057(e)) prohibits any amendment of a mark that "materially alters" the mark. See also TMEP 807.14 et seq. An amendment is only acceptable if "the modified mark contains the essence of the original mark (i.e., the mark as originally registered), and the mark as amended creates essentially the same impression as the original mark." TMEP 1609.02(a). If the marks do not create the same "commercial impression," or if it is a close call, it is safer to simply file new applications for the new mark because the new mark may fall outside the scope of protection offered by the existing registration and an amendment to the existing registration would likely be prohibited.

According to my quick search, these are the only applications for this new logo filed by Reddit so far. The website owns 41 other live applications or registrations with the U.S. Patent and Trademark Office, including registrations for AMA, REDDIT, and ALIEN BLUE.
Posted by Alex Montgomery at 9:33 AM